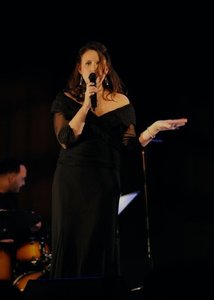 At approximately 8pm on this Friday the 13th, the world's greatest singer of all time whose name doesn't rhyme with Schmarbra Pfleisand, took the stage at Vienna, VA's Barns of Wolf Trap to put to rest the question in everyone's mind:  What will Julie Murphy Wells be wearing?  Will it be Versace?  Will it be Dolce & Gabbana?  No, it turned out to be an exquisite black gown stitched together by some misfit talking field mice named Perla, Jaq & Guss-Guss.   It seems that Julie has befriended many small forest animals in her neighborhood who also pitch in to help her bake gooseberry pies for the men she lives with - her family.  It was a gorgeous dress, and just the first of two extraordinary outfits on this Sophisticated night (sold out for three months).

True to 1997 fashion (her last show), JMW opened with a winning pair of Gershwin numbers, "I Got Rhythm" and "They Can't Take That Away from Me". Unlike 1997, there was a whole different cast of characters in the four piece behind her.  By night's end, it was clear that they play together often,  as they were tighter and snugger than a ballpark frank in a pencil sharpener.  It was also clear that this could possibly be the second greatest collection of musicians with whom she's every performed.

Brad Collins' sweet tenor sax chops, Mark Prince's graceful jazz drumming,
and upright dude Jeff Reed (whose low end prowess made every bassist in the
room wanna jump off The American Legion Bridge -- I'm still drying off) were
the perfect complement to JMW's stellar vocals.  However, the real coxswain
to this vessel was pianist Eli Staples on a Titanic-sized Yamaha grand.  A new
neighbor of Julie's, Staples anchored the whole affair, and even more remarkable,
kept his back to JMW the entire night!  No one in EFO has ever done that for fear of the
trajectory.  I'll never forget that shaker shot I took to the temple back in
2002 in Iowa.  This ivory tickler was brave, and so at ease with all 88
keys, that it was apparent Julie had found her true soul mate in keyboard
accompaniment.

JMW wasted no time acknowledging her true, true soul mate, husband Greg, by
performing their first dance song at their wedding, "YMCA".  Maybe it was
something else, as I was in the restroom, but it was a truly touching and
emotional introduction to the song, in her first display of verklempt-ness.

While Les Miserables and Chorus Line numbers popped up, the first set
belonged to the musicial Wicked, which was featured twice.  After these
renditions, Julie has done for this Broadway show's ticket sales what NASCAR
has done for the chewing tobacco industry.  The first song was solo with
some very impressive thespian chops from Ms. Wells.  The second number, a
duet, had JMW calling upon the services of her older, but not much older,
sister, Mary Hyland, for the cutest thing this side of a Double Mint Gum
commercial.  They sang.  They looked at each other.  They held hands.  They
fought over chores.  Good times.  Good times.  Afterwards, an elderly
florist made his way through the crowd to present the siblings with two
dozen roses.  The flower man was none other than their celebrity father, Joe
Murphy.  The sisters immediately began to argue over who got the prettier
arrangement, then they made up.  And hugged.  On stage.  Good times.

Julie displayed one other fascinating gift in addition to her pitch-perfect
singing:  she's funnier than Hell!  Her in-between stage patter had EVERY
Eddie from Ohio fan in the room wondering, "Why doesn't Robbie let her talk
more at EFO shows?"  She's hilarious, and almost too forthcoming.  If you
ever wanna know Julie's inner most thoughts or the price of her spanks, come
to one of her shows, where she's not competing with Robbie or Eddie for talk
time.  Sheeze.

The set break could mean only one thing:  COSTUME CHANGE!!  With a backlight
of eerie crimson, the band crept into the classic "Fever" when out from the
sidestage emerged the evening's diva in a spaghetti-strapped, Communist Red
evening gown.  Was it a tip of the hat to Valentine's Day?  Was it a
commentary on the current Stimulus Package?  We'll never know, but boy, did
she deliver.  JMW was comfortable and ready to perform an even more powerful
set.  More emotional.  More intense.  More red.  She was also working
without a net, as she admitted to the audience that she had absent-mindedly
left her cheat sheet notes backstage during the break, but did she need
them?  Naw!  Not with "all the love in the Barn", she assured her listeners.

I'd pretty much kept my inner cry baby at bay until JMW announced she was
about to do an original of hers.  "What could this be?" I thought on an
evening that prided itself on covers.  Sure 'nuf, she pulled out a classic I
hadn't heard in years:  a song written specifically to excoriate her
unsupportive father "When You See What I See (You Don't Support Me in
ANYthing, Daddy! thpppppbbbbtttt!)".  When she had originally performed it back
in 1992 with just her singing & playing piano - it sucked the air out of the
room with its honesty and emotion... but on THIS night, left in the hands of
Eli & the boys with Julie just singing, this became an absolute torch gem.
JMW even added a verse to bring us up to today (mentioning the current
family and house she didn't have back in 92 -- a house where there's "no
gold record on the wall".  Sniff, sniff).  Thankfully, my neighbor, Susan,
had a tissue... or at least I hope it was a tissue.

So, after ripping your father apart in song, whaddya do?  Why not bring him
up to sing a duet?!  That's just what happened as JMW announced Joe Murphy
who emerged stage left with wireless microphone in hand.  The song?
"Unforgettable".  Yeah, it was unforgettable.  Joe only needs to show his
face in a room to prove that his fanbase is as big as his daughter's, yet he
only needs to open his mouth & sing to prove that his heart is as big as the
room.  A moment like this on stage could turn even the darkest cynic, and
illustrate on the eve of Valentine's Day that true love conquers all.  During the sax solo,
Ole Joe also showed off some fine dance steps with his youngest child in his embrace.
Remember, Fred Astaire did everything Ginger Rogers did -- only forward
and in loafers.

How do you top that?  Announce CD sales in the lobby?  Thank the sound man?
(Who was awesome - Bob Grimes!).  JMW plowed on with just Eli playing along
for another Les Mis number, and then.... she pulled out the Babs
card.  Yep, Streisand.  As she launched into the familiar "You Don't Bring
Me Flowers" I thought "Who's gonna cover the Neil Diamond part?"  Maybe I
should run up stage and save her.... too late.  There's Schaefer.  Right on
cue.  I shoulda known.  Yeah, he sounded great.  So did she.  It was quite
obvious that they'd both been in their share of musicals as they worked
it.... and I mean, they WORKED IT, like seasoned pros.  Peaches & Herb?
Ashford & Simpson?  Kenny Rogers & Crystal Gayle?   Justin Timberlake &
Janet Jackson?  MOVE OVER.  There's a NEW power duo on the block, and
they're kickin arse and taking social security numbers and DNA samples.
Great job, Robbie.

JMW & co. finished up with a great number from "Funny Girl", and as strong
as the evening was, it was quite evident the Barns had not seen the last of
her, even though they cleared the stage.  When she re-emerged with just Eli
for a well deserved encore (some, like me were disappointed there wasn't
another costume change), she gave a beautiful, extemporaneous, emotional,
heartfelt address of appreciation to the crowd.  Julie's journey has been
tough the past four years.  I'll never forget stopping by her place in the
early throes of her chemo and asking her why she was upset.  When she didn't say
anything but pull out a clump of hair from her scalp, I just about teared up with her.
She's been a real champion of the cause, and on this particular night, she
really only made mention of the cancer bout twice - once casually earlier in
the night and another right before her last fitting number.  It's the one
song I won't try to recount.  Sorry to say, you had to be there.  (When she
does this show again, buy your tickets right away).  One thing I will share
is that Julie's simple and selfless hope and wish for the audience was that
they would leave in a better state than the state in which they arrived.

More pictures of the show at Greg Wells Gallery