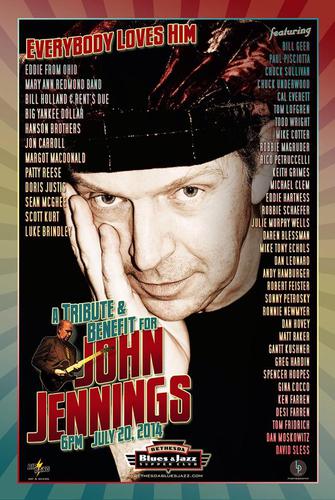 Everybody Loves Him: A Tribute and Benefit For John Jennings

Our friend and colleague John Jennings is battling cancer. A group of his friends have set up a tribute for him on Sunday July 20th from 6 – 10pm at Bethesda Blues & Jazz. There is a great line-up of performers who have worked closely with John that are scheduled to appear to perform John’s music over the years. The show will include live performances of songs from his many solo CDs as well as reunions from former bands such as Big Yankee Dollar, Bill Holland and Rent’s Due, and The Hanson Brothers. The performers include Eddie From Ohio, The Patty Reese Band, Jon Carroll, Pete Kennedy, Margot MacDonald, Luke Brindley, Scott Kurt, the Mary Ann Redmond Band, Doris Justis and Sean McGhee, and many others.


The title of the show is from one of John’s songs: Everybody Loves Me.
It promises to be a night of musical magic as the audience will hear songs and bands from John’s long musical history. All proceeds will go directly to John to help John with his health issues.

Please join us for a celebration of some great music. Tickets can be purchased at: http://www.instantseats.com/index.cfm?fuseaction=home.event&eventid=DA2F4667-90B1-1C0A-06298C51F6C3A6A6

export this event to my calendar